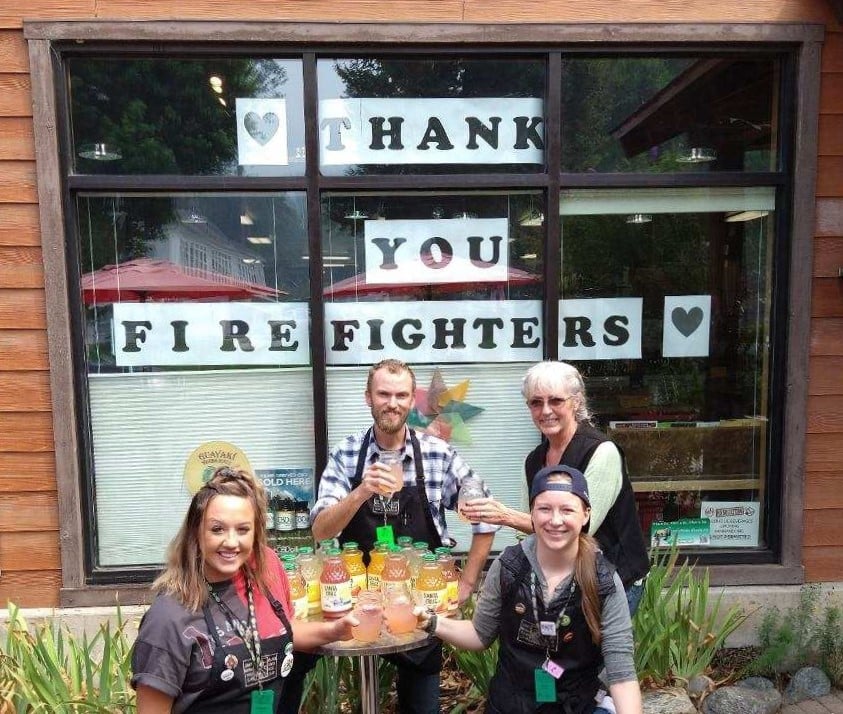 Your Co-op’s Commitment to Community

Feather River Food Co-op is deeply rooted in our community. Simply put, we would not exist without the caring, thoughtful, and amazing people in Plumas County and beyond. As a food cooperative, owned by our community, we have a responsibility to be here for you; especially when you need us most. Concern for Community is one of the 7 principles that all cooperative businesses follow, and it has certainly been first and foremost in our minds.

During the devastating Dixie Fire, your Co-ops have received more than 12 pallets of donations for Dixie Fire Relief from our primary grocery supplier, United Natural Foods (UNFI). We have also received numerous smaller donations from companies like NOW Foods and Lundberg Rice. We continued to receive donations into the winter months, coordinating with local food banks to get them to impacted members of our community. We are so appreciative of the tremendous support we have received from these amazing companies – Thank You!

Our hard-working management team reached out to suppliers directly, working with them to secure donations of much-needed respiratory-support products, body-care items, ice, ready-to-eat meals, flour, and so much more. Co-op staff members organized food distribution and helped to set up and coordinate donation sites; all while their own families and homes were threatened.

Our staff, along with a very special volunteer, moved these needed supplies to a central distribution center set up at the Feather River Grange Hall in Quincy. We delivered two full truck loads and a trailer full of food to Taylorsville and Crescent Mills.

The staff are amazingly resilient and have shown what commitment to community truly means. Thank you, staff, for being dedicated to the mission of our co-ops and the community.

July 19th – United Natural Foods collaborated with us to establish what our community needs were.

July 31st – The co-op giving tree was set up as a way for customers to donate money to PRS and PCIRC. A total of $5,347.00 was raised to donate to fire recovery efforts.

August 3rd – Purchased all we could from Greenville High School’s Garden Education Program to support them.

August 9th – Received the last of the summer UNFI pallets donated, moved them to the food bank so the community could have access.

November – UNFI collaborates on a pallet of ready-to-get Thanksgiving meals. The co-op assisted in moving these meals to the food bank center.

November & December – The co-op donated some leftover turkeys and other holiday foods to the food banks.

In total, we received $50,000 in donations to support our community during this difficult time. We will be forever grateful of our partnerships with UNFI, NOW Foods, and more. THANK YOU!

May 12
The Devil In The Milk

May 10
Co-op and Community