The Devil In The Milk 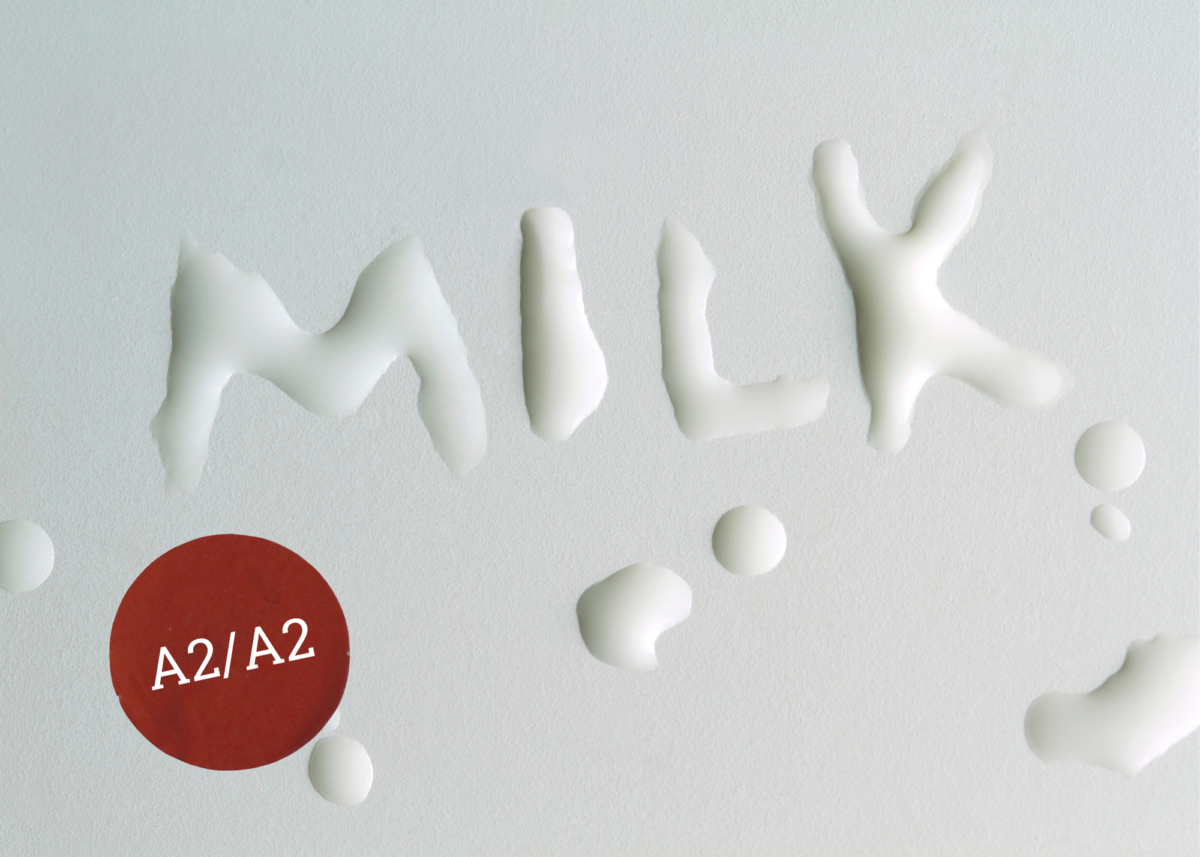 “Every body needs milk” – or does it? Or are some types of milk more favorable than others for specific people? I tend to favor the latter statement after research that I have uncovered.

Milk Basics
First, let’s begin with some Milk 101 basics.1 Cow’s milk can be broken down into 7 basic ingredients (Figure 1).2 The most prolific is plain old water at approximately 88%. Next is protein at about 3% to 4%, of which 80% or so is casein and 20% or so is whey and can vary from breed to breed. Milk proteins also contain all 8 essential amino acids required by humans. Depending on the type of milk, the fat content varies from 3% to 6%. In around 5% of milk lurks the potentially evil carbohydrate lactose. Next, milk contains a fair amount of the water-soluble B vitamins and vitamin C, a large portion of which are destroyed during pasteurization. Cow’s milk also contains vitamins A, D, E, and a small amount of K, which are mostly removed in our society’s quest to consume lower-fat or nonfat products. Finally, there are minerals in milk, primarily calcium and phosphorus. Unfortunately, soluble and assimilable calcium in milk is reduced again via that unnecessary step of pasteurization.

The serum (whey) protein family consists of approximately 50% ß-lactoglobulin, 20% a-lactalbumin, and a smattering of less prevalent molecules: blood serum albumin, immunoglobulins, lactoferrin, transferrin, and many minor proteins and enzymes. Each whey protein has its own characteristic composition and variations. Whey proteins do not contain phosphorus. They do contain many amino acids that have sulfur, which form disulfide bonds within the protein. Denaturation can break the disulfide bonds and is an advantage in yogurt production because it increases the amount of water that the proteins can bind, which improves the texture of the yogurt.

The casein family of protein consists of several types of caseins: alpha (a), beta (b), and kappa (k) caseins. The high phosphate content of the casein family allows it to associate with calcium and form calcium phosphate salts. The abundance of phosphate allows milk to contain much more calcium than would be possible if all the calcium were dissolved in solution. Casein proteins provide a good source of calcium for milk consumers if the milk is not pasteurized.

A2 versus A1 Milk and Beta-Casomorphin-7
Numerous references have begun to reveal how diseases, such as type 1 diabetes and cardiovascular disease, are linked to a tiny protein fragment that is formed during the digestion of the A1 beta-casein, BCM-7. This milk protein fragment is produced by cows in the US, New Zealand, Australia, and many other Western countries. Milk that contains A1 beta-casein is known as A1 milk, whereas milk that does not is called A2 milk. Originally all milk was A2 until a mutation affecting Holstein cattle occurred some 8000 years ago.3 This mutation has been passed on to many other breeds, because Holsteins have been used to genetically improve the production of most other breeds. Herds in much of Asia, Africa, and parts of southern Europe remain naturally high in A2 cows. Also, interestingly, the human beta-casein molecule consists only of the A2 type, which means that breast milk releases no BCM-7. In addition, human milk contains primarily whey proteins, whereas cow’s milk has about 80% of its protein as casein. Finally, goats and yaks only produce A2 caseins, and most sheep milk is A2.

A2 beta-casein is found in all types of bovine animals, including all Western, African, and Indian cattle and water buffalo. A1 beta-casein is carried by some cows of European breeds, all of which belong to the subspecies Bos taurus.4 African and Asian cattle belong to the Bos indicus subspecies. However, the prevalence of the A2 and A1 beta-casein allele varies between cow herds and also between countries. For instance, a recent study on the beta-casein allele frequency in indigenous Indian cattle (Bos indicus) and river buffalo breeds reported 99% to 100% presence of the A2/A2 genotype in its indigenous cow and buffalo breeds.5 The same study also reported an absence of the A1/A1 genotype in indigenous Indian cow and buffalo breeds. Turning to European breeds, the Holstein, the most common dairy cow breed in Australia, Northern Europe, and the US, carries the A1 and A2 beta-casein alleles in approximately equal distribution. Jersey herds typically have an A2 allele frequency somewhat higher than this, but with considerable between-herd variation. The Guernsey breed has an A2 beta-casein allele frequency of more than 90%.6

The difference between the A1 and A2 type beta-casein variants is a single amino acid substitution at the 67th residue of the 209-amino acid beta casein protein chain (Figure 2).7 This difference in structure results in A1 beta-casein. The beta-casein protein consists of 209 amino acids strung together. The sole difference between A1 and A2 amazingly takes place at amino acid position 67, where histidine is substituted for proline. The proline forms a tight bond with amino acids on either side of it, but histidine does not. In our digestive tracts, because of the weakness of the peptide bonds with histidine, a peptide consisting of 7 amino acids breaks off. This peptide is BCM-7 and is also an opioid peptide.8

A recent study in humans has confirmed that BCM-7 is produced in the digestive system following the intake of milk casein protein.9 This study found detectable bovine BCM-7 in the small intestinal effluents of adults fed 30 grams of milk casein protein. BCM-7 has the demonstrated potential to elicit opioid activity via its affinity to mu-opioid receptors on a range of tissues and systems including the digestive tract, neurological system, and immune system.10–14 Giving naloxone with A1 milk will neutralize those opioid properties.15 BCM-7 can also be hydrolyzed further to produce the shorter exorphin with greater opioid receptor binding affinity, beta-casomorphin-5 (BCM-5).16

Due to the large size, it should be difficult for BCM-7 to pass through the gastrointestinal mucosal barrier.17 Many Americans suffer from leaky gut syndrome, which unfortunately facilitates the entry of BCM-7 into their bloodstreams. To possibly confirm this association, BCM-7 has been found in the urine of some people diagnosed with leaky gut. BCM-7 is also released when milk is pasteurized before it can be digestively produced in our guts. The vast majority of milk in the US is pasteurized.

Clinical Stories
I have personally seen some people (not all!) who switched from A1 to A2 milk and had their milk intolerance disappear. One patient was a Czech who had escaped in 1962 from Czechoslovakia, was raised in Switzerland, and came to the US as an adult. He could not tolerate any dairy products here. He went to a farmers’ market in Portland, Oregon, where he saw advertised that they only sold milk from A2 cows. He decided to try their cheese and milk and, voilà, his milk intolerance was gone, as long as he only drank the A2 milk.

Another patient has found that his severe chronic lower back and morning stiffness has almost completely disappeared after he switched to only A2 milk. These symptoms had been present almost continuously for 20 years. He feels as if a miracle has happened.

Another patient said she used to avoid drinking milk in the evenings because it would make her legs jerky. She has now consumed A2 milk in the evening several times and that has not happened. On a recent night she had symptoms again and thought that maybe it was not the A1 after all. Then she remembered that she had eaten a salad with feta cheese that was made from A1 milk.

Potential Genetic Solution
The solution to the problem is both simple and unbelievably cheap. All that is required is for farmers to ensure that their cows are inseminated, naturally or artificially, with semen from A2/A2 bulls. In New Zealand, some of the smaller groups of dairy farmers, predicting the increase in consumer demand for A2 milk, have already converted their herds to A2 cows.

The A1 gene can be bred out of a herd in about 10 to 15 years simply by choosing what are called A2/A2 sires. This means that neither the dam or sire carries the A1 gene.  Unfortunately, until the consumer is educated and begins to request A2 milk, the motive will not be there for the selective breeding in most dairies. Interestingly, New Zealand labels A2 milk in its grocery stores.

What can you do? You can ask your providers of local milk if they are breeding for A2/A2 milk. If they do not understand it, you can refer them to this article. You could also consider purchasing your own milk goats (they do not carry the A1 gene), buy a cow with A2 genetics, or buy a cow with the plan to breed A2 genetics and select future heifers.

January 4
How We’re Addressing Our Plastic Use

October 18
The Current State of Produce