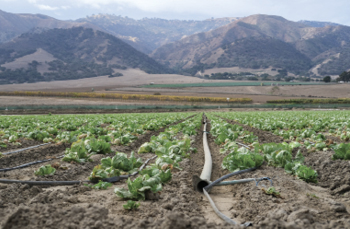 A virus spread by insects is causing widespread damage to lettuce crops in the Salinas Valley, the renowned Salad Bowl that provides more than one-half of America’s lettuce.

According to growers and researchers, impatiens necrotic spot virus, or INSV, is ravaging lettuce fields in the region that normally accounts for $1.2 billion in annual lettuce production.

“The impact of this is huge,” said Tony Alameda, manager at Topflavor Farms, which grows lettuce in the Salinas Valley.

INSV is a plant pathogen transmitted by millimeter-long thrips. The insects, which reproduce rapidly and travel long distances in the wind, can spread the virus from one lettuce plant to another within minutes. Then, “thrips go from one field to the next,” Alameda said. “It just becomes a wave.” The virus causes lesions and stunts the growth of lettuce plants. It also weakens them, researchers say, making the lettuce susceptible to other diseases that do further damage. There is no known treatment for INSV.

“Once the thrips acquire the virus, there’s very little growers can do to stop the spread,” said Jennifer Clarke, executive director of the California Leafy Greens Research Board.

On a rainy day last week, Eric Morgan, vice president of environmental science and resources at Braga Fresh, which farms in the Salinas Valley, sliced through a shriveled head of iceberg lettuce in a field west of Chualar.

“I think the dead and dying plants have a secondary fungal infection,” he said, which combined with INSV to attack the rows of yellowed lettuce. Even the greener heads were stunted and showed browning on the ribs, a symptom of INSV.

Morgan said he doubted the farm’s harvest crew would salvage anything from the 15-acre field. “Every day that passes, more plants will drop,” he said, adding that the field was typical of what lettuce farmers in the area are seeing this fall.

“Most growers have at least one field — or multiple fields — like this,” Morgan said.

Some growers have given up on entire fields before harvest. “They’ve decided it’s not even worth it to water and fertilize and spray it,” said Mark Mason, fertility and pest control manager at the Salinas-based Nature’s Reward, referring to a farm near Gonzalez. “I saw them pulling up drip tape yesterday,” he said last week.

INSV was first seen in lettuce in Monterey County in 2006, but it only began taking a heavy toll within the past three or four years. One explanation is that warmer winters are allowing more thrips to survive year-round.

“Without the cold winters that we used to get, we’re not able to break this virus cycle,” Clarke said. “It’s just ramped up, and now we’re seeing the effect.”

In a normal planting, an acre in the Salinas Valley yields about 800 cartons of lettuce. This fall, growers estimated they’re getting 150 cartons per acre, representing a yield loss of more than 80%.

Lettuce prices are reflecting that shortfall. As of early November, it was selling on the open market for more than four times the usual rate, with prices expected to hold until farms in Yuma, Arizona, begin supplying more lettuce in December.

Some California growers—in less impacted parts of the Salinas Valley, and in Fresno, Santa Barbara and San Luis Obispo counties—are cashing in on the market. But most in and around Salinas have little if any lettuce to spare after satisfying the contracts their shippers agreed with retailers and companies that pack salad mixes.

The contracts, which are negotiated in advance, guarantee baseline income for farmers. But the contracts also mean that this fall farmers are selling most of their lettuce for a fraction of the market rate. “There’s very little lettuce available that isn’t committed already either to a salad producer or to a retailer through a contract,” said Zischke, the INSV task force leader.

After multiple years losing lettuce crops to INSV in his prime ground in Salinas, Alameda, the Topflavor manager, harvested his final lettuce planting in that ground in August instead of November this year, avoiding the fall, when INSV has tended to hit lettuce crops hardest.

Instead, Alameda switched over to cilantro, radishes, brassicas and other crops that aren’t vulnerable to INSV but are less valuable than lettuce. Given the cost of rent on that land, “it’s not a sustainable crop rotation,” he said. “It’s hard to maneuver out of the problem financially. You’re just trying to buy time.”

Over the past couple years, growers and researchers have met frequently to assess the damage and find solutions. “There’s a lot of people looking at this,” said Richard Smith, a University of California Cooperative Extension farm advisor in Monterey County.

INSV and thrips both have a large range of plant hosts, including common weeds that grow in nonagricultural areas adjacent to lettuce fields and serve as reservoirs for the virus. INSV was also recently found in spinach and celery.

“That is the underlying challenge,” said Daniel Hasegawa, research entomologist at the U.S. Department of Agriculture. “How do we get ahead of this thing when we have a ubiquitous problem beyond the lettuce crop itself?”

Farmers and Monterey County authorities are asking managers of residences, roadways and industrial sites to weed their properties, especially during a two-week “host-free” period enforced each December to break plant disease life cycles. Growers in the county are not allowed to have any lettuce above ground during that time.

Meanwhile, researchers and seed companies are working to identify and breed lettuce varieties that are resistant to INSV and the diseases, such as Pythium wilt, that often combine with it. “We see plant breeding as being the ultimate solution,” Zischke said.

Some lettuce varieties already appear to resist Pythium wilt better than others. “There are varieties that have pretty good tolerance,” said Smith, the farm advisor, referring to three romaine lettuce varieties bred by the Dutch company Rijk Zwaan. “The question is how much seed is going to be available for the coming year.”

Growers aren’t counting on any quick fixes. “It’s going to be a rough go for the next couple years,” said Alameda. He and other growers emphasized the need to fund research and remain vigilant even after resistant varieties become widely available.

January 4
How We’re Addressing Our Plastic Use

October 18
The Current State of Produce